Now that I am a published author, the whole world of reviewing and what it actually means has been an interest of mine.

Do you trust reviewers? Does it influence your decision to buy a book?

First, let me give my pre-published-just-a-reader point of view. I can say reviews really didn't matter me. I didn't read them unless the book was published by a well known author and poorly reviewed. I don't know. Maybe it's like when we slow down to look at the carnage from a car accident.

When I got my e-reader, I began to look more at reviews. I didn't want to junk up my reader with poorly written books that I wouldn't read through the first couple of chapters.

I found myself suspicious of reviews that were under twenty and all five star. I mean, to me that felt like family and close friends and were they really giving an unbiased review? Hard to know. If the novel had over thirty or so reviews and had a distribution amongst all the stars but most were four and five stars with a few one, two, and three stars—I was more likely to download it.

Then I began to realize there is a trust issue between the buyer and those who review. There was an interesting column by author Mike Duran that focused on this issue where he hypothesized that those who reviewed Christian books were softer and more favorable toward certain publishers’ books so it wouldn’t hurt their chances of someday being published by that particular house. You can read his thoughts here.

After I was published, I was not one of those authors who couldn't read the reviews—though I did find myself mostly focusing on Amazon and Goodreads for my primary perusing.

My now I'm-published-but-still-mostly-unknown-author viewpoint concerning reviews is as follows.

1. Reviews are important for newer authors who are building a readership. This is one of those Catch 22 situations of getting people to review your novel who don't know you by perhaps offering them a free book and hoping they follow through. Perhaps 50% of the people who received review copies of Proof actually have thus far followed through with a review. The reason I do think it's valuable in this phase of the author's life is to help with that word of mouth spread. If you look at a debut novel that's gotten over 100 favorable reviews—WOW, a lot of people are loving that book and I know it would influence me to buy the novel too.

2. Reviews from well respected sites do help book sales. Proof, my debut medical-crime thriller, got a starred review from Library Journal and I know that has definitely influenced sales.

3. Reviews don't help me decide to buy books from authors I regularly follow. For me, Dean Koontz, is my most favorite author. Do I 100% love everything he's written—no. But, what I've learned from reading Dean through his lifetime of writing books is that there are definitely highs and lows to the writer's life but I know a prolific author has it in them to produce good stories.

4. Reviews help evaluate the competition. There is one particular author who was a debut novelist that released her book the same time Proof released. She has over 100 reviews and the reason I've been reading them is to see what it is in her novel that is resonating with readers. That can help me have market awareness.

5.  I also need to review books. This is becoming more apparent to me that it helps people determine what kind of author I might be by what I like to read. A couple of people who have sent me letters have mentioned this specifically.

What are your thoughts on reviews? Helpful? Trustworthy? Do they influence your decision to buy books particularly from a newer author?

Jordyn Redwood is a pediatric ER nurse by day, suspense novelist by night. She hosts Redwood’s Medical Edge, a blog devoted to helping contemporary and historical authors write medically accurate fiction. Her debut novel, Proof, garnered a starred review from Library Journal and has been endorsed by the likes of Dr. Richard Mabry, Lynette Eason, and Mike Dellosso to name a few. You can connect with Jordyn via her website at www.jordynredwood.net. 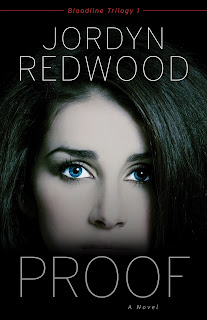 Dr. Lilly Reeves is a young, accomplished ER physician with her whole life ahead of her. But that life instantly changes when she becomes the fifth victim of a serial rapist. Believing it's the only way to recover her reputation and secure peace for herself, Lilly sets out to find--and punish--her assailant. Sporting a mysterious tattoo and unusually colored eyes, the rapist should be easy to identify. He even leaves what police would consider solid evidence. But when Lilly believes she has found him, DNA testing clears him as a suspect. How can she prove he is guilty, if science says he is not?
Posted by Peg Brantley at 1:00 AM