When I began writing The Wrong Guy five years ago, it was because the late 60s and early 70s had played such a profound role in my life. I attended Eastern Michigan University on the heels of the Michigan Murders, the brutal slayings of seven college coeds. John Norman Collins had been arrested, but the atmosphere was still one of uncertainty. As a young college freshman shot straight out of a protected parochial high school cannon into the “real” world, I was naïve, but smart enough to be just plain scared. What if the cops had the wrong guy behind bars?

Our house mother conducted meetings about the importance of using the buddy system whenever traveling on or off campus, and we were advised to carry mace on our key rings, wear whistles around our necks, and lace our keys through our fingers should we find ourselves in a life-threatening situation. Not the typical college experience.

I remember it like it was yesterday. The fear was palpable. What I didn’t realize then, and what I didn’t realize until after I’d written The Wrong Guy—fiction loosely based on these serial murders—was how deeply tied our community still remained to those murders, and how my writing the book would affect those who had lived through those times.

Since the book’s release, many people have spoken to me about their particular connections to the Michigan Murders. I’ve spoken to women who’d sat in front of Collins in college classrooms, played cards with him at their family’s kitchen table, heard stories about Collins warning women not to go out alone after dark, and offering to walk them home. I’ve spoken to someone whose family member discovered one of the girl’s bodies, and to another who attended the trial.

The most profound of all the connections I’ve made in writing the book is with the sister of the first victim. She and I are employed by the same school system. I had no idea that she worked there, and I don’t believe that she was aware that I was writing about the murders that so closely touched her family’s lives until the book was due for publication. When we finally learned of each other, we set up a meeting. It was tearful and touching. I had forged a connection I never intended in the writing of the book. Once I knew of her, I felt guilty for writing about the murders, for bringing her family’s pain to the surface yet again. Could I make something good come out of something so horribly agonizing? 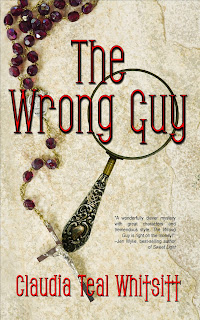 As the victim’s sister told me, because Collins was ultimately only convicted of one of the crimes, her parents, now in their eighties, have lived without closure for the past forty-five years. August 7, 2012 marked the day that Mary Fleszar’s body was discovered in 1967. She was only nineteen years old. My heart goes out to all the victims and their families.

Have you written a story or book in which you unwittingly brought up painful memories for someone?

If, like me, you discovered that your work created a painful situation for someone else, how would you handle it?

Would you or have you ever changed the course of your writing because you knew your words would affect someone in a negative way?

The Wrong Guy, is available at Amazon in both print and e-book formats. Identity Issues, the first mystery in Claudia’s Issues series, is due out this fall. Claudia can be reached at her website.