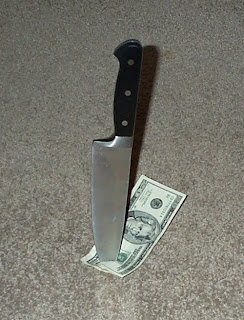 As crime writers, most of you are familiar with the concepts of motive, means, and opportunity as they pertain to developing suspects. Detectives often establish these facts through interviews and statements gathered during the course of an investigation. Statements like Brad hated Jessica for leaving him (motive) or Brad owns a gun (means) can carry a lot of weight. Detectives may also rely on certain documents like dining, bank, or gas receipts to place a person in a given location at a given time (opportunity).

But what about evidence at the actual crime scene? Detectives may not always have witnesses to talk to. Witnesses also lie. Sometimes the victim's identity is unknown. Some victims are very private and don't share a lot of information about their lives with friends and family (assuming they have either) so an evaluation of the evidence at the crime scene could be crucial in determining a number of things including;
If CSIs don't know why the crime was committed they might go off in the wrong direction chasing leads that won't pan out. Coincidentally writers must consider these factors as well if they want their fictional crime to make "sense". Authors and CSIs however, approach motive, means, and opportunity from opposite ends of reason. The CSI attempts to discern these things from the evidence left at the crime scene whereas an author begins with the condition and attempts to fashion the "evidence" to demonstrate it.

As an author I always begin by asking myself "what is the motive?" There are a number of categories to choose from including jealousy, revenge, profit, or to conceal another crime. Once that is decided I then try to figure out the best way to demonstrate that to the reader. How do you "show" jealousy through physical evidence? A torn photograph perhaps? A stack of surveillance photographs? A box of love letters; each one more desperate and rambling than the last? If you want to add a twist then select evidence that could be interpreted in different ways. A love letter torn to sheds may not tell you who shredded it. Was it the jealous lover or the spouse?


Showing means is a bit more straightforward. Does the suspect have the ability or capacity to commit the crime? This will depend on the conditions at the crime scene. An adult male of reasonable physical strength could beat a victim with a baseball bat. But what about an elderly woman? Could a man you describe as a "linebacker" fit through a doggie door? Would a stranger have the security code for an alarm system? Would the reader believe that a suspect who doesn't own a car could elude the police in a car chase? These are all things to consider when laying a foundation for your characters.

Opportunity is usually a matter of keeping your time line straight. What kinds of physical evidence do police rely upon when considering opportunity? Receipts, surveillance video, text messages, toll charges, can all be good choices but they all depend upon one critical element; the correct time. How can you tell from a surveillance photo if the clock on the wall is showing the correct time or has dead batteries? Date/time stamps can be off by minutes, hours, days, even years. Police can account for this discrepancy by noting the time they collect the evidence or inspect the device but what if they forget? What if it was purposely altered? A surveillance video showing your suspect in the area of the crime might seem like great evidence until a forensic expert determines the shadows in the video are from the morning and not the afternoon when the crime was committed.

So as you are developing your story ask yourself "How do I show motive, means, and opportunity"? The evidence may be straightforward or it may have dual meanings. I find that people typically express themselves clearly. Sometimes it is a matter of eliminating all of the other possibilities. A photograph of a woman with a knife through it can only be interpreted so many ways right? These types of clues help keep the reader engaged and invested in the story. Whatever you choose to express yourself make sure that each of these issues is eventually addressed for the reader. If you don't...they'll surely let you know.
Posted by Tom Adair at 7:00 AM