From time to time, my world gets extra shiny things. When I find an author who makes me want to read everything he or she has ever written—it's a shiny thing. When I discover an author (who, in this case, I want to be when I grow up) who writes about tough things in a humanitarian and compassionate way, and also walks the walk . . . well, he's not only the pot of shiny things at the end of the rainbow, but the rainbow itself.
I'm very proud to turn my posting day over to my friend, Tim Hallinan. He has something important to share.
~Peg Brantley, Writer at Work, Stumbling Toward Publication 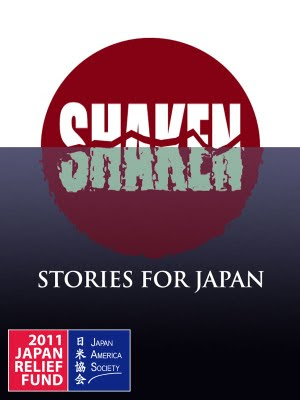 Timothy Hallinan is the Edgar-nominated author of the Poke Rafferty Bangkok Thrillers, which Publisher's Weekly called, "razor-sharp, convincing, and heartbreaking." He is also the author of the highly-praised Simeon Grist mysteries and the e-book original "thrillers with a laugh track" featuring L.A. burglar (and private eye) Junior Bender. Junior's debut, Crashed, is available on Amazon now. Hallinan's story, Hansum Man" was recently anthologized in Bangkok Noir, a collection of sotries about The Big Mango by twelve well-known writers. He lives in Santa Monica, Bangkok, and Phnom Penh. He's online at www.timothyhallinan.com.

I've never edited anything in my life.

I've always figured that the editing gene and the writing gene are two completely different things.

And now that I'm officially the editor of the Kindle e-book SHAKEN; STORIES FOR JAPAN—a collection of 20 original short stories by 20 more-than-original mystery writers—I've still never edited anything in my life.

Before I explain that, let me say that the twenty writers who contributed to the collection, the writer who designed the cover, the poet who let us use her internationally-praised translation of haiku, the e-book producer who converted the whole thing into a beautiful e-book and put it online—well, they all got paid exactly the same amount.

SHAKEN: STORIES FOR JAPAN is, I think, the first e-book ever conceived solely as a fund-raiser. One hundred percent of all royalties go directly to the 2011 Japan Relief Fund administered by Japan America Society of Southern California, which has already raised more than $1 million in disaster relief. And they've pledged that every single penny that comes in will go straight to the areas devastated by the March 11 earthquake and tsunami, many of which are also still under threat of nuclear contamination.

So for $3.99, you get twenty great short stories, 21 haiku, and a chance to help people who really need it. SHAKEN: STORIES FOR JAPAN is available now through Amazon. It's never been easier to contribute.

So why haven't I really edited anything?

Because the stories don't need it. The writers are first-rate, and they were all working on tiptoe for this project. In alphabetical order, they are Brett Battles, Cara Black, Vicki Doudera, Dianne Emley, Dale Furutani, Stefan Hammond, Rosemary Harris, Naomi Hirahara, Wendy Hornsby, Ken Kuhlken, Debbi Mack, Adrian McKinty, I.J. Parker, Gary Phillips, Hank Phillippi Ryan, Jeffrey Siger, Kelli Stanley, C.J. West, Jeri Westerson, and me, and I didn't have a single important question about anything any of them wrote.

In fact, they were all so good that I went back and rewrote my own story.

Wendy Hornsby's “The Emperor's Truck” brings a young Japanese-American woman home to San Pedro for the first time after years spent penned up in World War II relocation camps: “Everything seemed familiar, and not. Tricks of memory, Eunice Toyama thought. How many times during the last four years had she imagined coming home to San Pedro and finding everything exactly the same as she pictured it in her mind's eye?”

And Cara Black's “Mosquito Incense” gives us another homecoming, across the sea, in the present time: “No more, he promised himself, as the bullet train edged into Tokyo Station. The last time had been the last time. He dumped Eddie's letter into the porcelain toilet hole, flushed it down the white tiles, as loudspeakers blared in Japanese.

He left the station, slipped into Tokyo as easily as a rubber glove. “

The big problem, sequencing the stories was solved by haiku. Adrian McKinty's nonfiction opener is an elegiac remembrance of how he followed the 17th-century poet Basho up to the Sendai area, now almost completely destroyed. I thought that haiku would be a good way to bridge the stories and also to remind the reader of the rich Japanese cultural tradition. And I got permission—free, again—from Jane Reichhold, whose 2008 volume, Basho: The Complete Haiku, has set a new standard.

Two more gifts—Gar Anthony Haywood, one of my favorite writers in the world, surprised us all by designing what I think is a brilliant cover. And Kimberly Hitchens of booknook.biz donated her services to assemble, convert, and beautify the final product.

And now you get to give—to the effort to help battered communities and broken families – by buying the book. I hope you do.