Sex, Drugs, and Rock and Roll 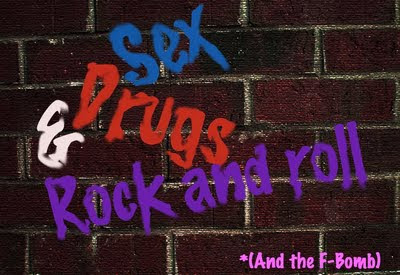 As an author, I find it difficult to write about murder without taking a trip to the Dark Side. After all, I think on some level we sort of expect that. Logically speaking, if you're going to have a killer, then you're going to have deviant behavior. The two seem to go hand in hand. But just how dark and how deviant?

For me, I draw the line where gratuitous begins, and most often, that's where I find trouble lurking between the pages of novels. Using sex, drugs, or violence just for the sake having it or for shock value does a book little good. In fact, I think, it'll do more harm. Readers know the difference, and they know when they're being played. If you don't believe me, check out some of the emails I get. These folks know their stuff, and many understand plot structure as well as any author.

In my novel, While the Savage Sleeps, there is violence. No question. It's graphic and it's frequent. But here's the thing: it's also absolutely necessary. Not only are the plot and the characters driven by it, but the final resolution also depends on it. Without that element, the story would fall flat and the reader would likely feel short changed. Context is the key, and I think a good question for any author to ask him or herself when considering whether or not an element belongs is: Would this story suffer without it? If the answer is no, then chances are you don't need it, and chances are the reader will feel the same way.

As for sex, typically, I don’t put it in my books—not because I’m a prude or that I have anything against the act itself. It’s just that logistically it doesn't seem to make sense.

Here’s an example: There’s a killer on the loose, and Sam and Linda are running for their lives because he’s hot on their trail. If all that weren’t enough, Detective Holiday thinks Sam could in fact be the killer. The clock is ticking and the two must not only prove Sam’s innocence, they must also find the real suspect.

I don’t know about you, but I’m thinking sex is going to be the last thing on Sam and Linda's minds. Not only that, but it would seem in addition to slowing down the pace, adding this element would also detract from the story. Now I'll agree that there are authors who can expertly weave sex into a suspense thriller rather seamlessly, and I applaud them for that. It just so happens that I’m not one of them. But from what I’ve read, neither are a few others, and when I see it needlessly thrown in, it comes across as contrived and gratuitous. It’s also the exact point where they lose me.

There’s been a lot of discussion about the F-bomb, namely, whether or not it belongs in novels. I'd guess the answer depends on the reader’s tolerance level. Personally, I don’t have a problem with it, and I use it whenever I feel it’s necessary in terms of character development. My job is to make fiction seem real, and the reality is, people do use the word. I also believe that when implemented correctly it can add authenticity to a character. Think of it this way: if a cop said,“darn it” in a novel, would it make you want to continue reading? Not me.

Of course, throw in a drug-addicted, sexually compulsive, cussing sociopath, and really, anything goes. Again, it’s all about context.

Overall, I know opinions on this subject vary, and as an author I’m always interested in knowing what readers think. So I’d like to ask: Do these elements bother you in a book, and just how far is too far?