An Interview with J.H. Bográn, author of Firefall 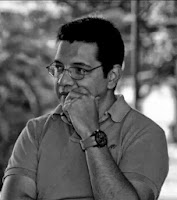 We're pleased to welcome J.H. Bográn as a guest on Crime Fiction Collective. José, who is active in the International Thriller Writers organization, has just released his riveting new novel, Firefall, through Rebel E Publishers.

He’s offering a free e-copy to a lucky commenter, so be sure to leave a comment below to have your name entered in the draw.

CFC: Welcome to CFC, José. Can you tell us, in a nutshell, what your new novel, Firefall, is about?
JHB: Firefall is a harrowing tale of a grieving man seeking a reason to live while dealing with insurance fraud and an international ring of car thieves.
New York City firefighter, Sebastian Martin, seeks sanctuary in spiraling alcoholic oblivion following the loss of his wife and child in an air crash. Consumed by rage and resentment, mostly directed against his brother and uncle, he takes a last-ditch job in Dallas, Texas, investigating insurance fraud. Sebastian ends up strapped to a chair facing torture at the hands of Howard Gonzales, a former KGB trainee who enjoys playing with fire on his victims to get answers. 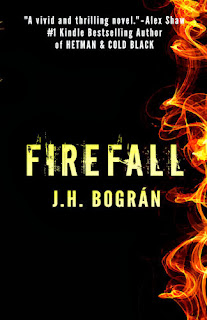 CFC: Tell us about the symbiosis between the protagonist and the antagonist in Firefall.
JHB: When Sebastian Martin is not looking into the car theft operation, he is searching for missing persons. His nemesis, Howard Gonzales, will stop at nothing to protect his auto-theft business.


Their confrontation is just as inevitable as two freight trains racing toward each other on the same track.
And their clash is just as spectacular.
CFC: Can you share an excerpt to illustrate that point?
JHB: Of course! Here’s an excerpt from near the climax when they meet face-to-face for the first time.
A man wearing large reflective sunglasses stood beside him. In one hand, he held a cigarette butt, and a handkerchief on the other. The man’s skin was dark, a local. He wore khaki cargo pants and the black polo shirt seemed to blend with the poor light, giving the impression of a hovering head standing over him.
“I will make this easy for you, Gringo.” The heavy accent told no tales about his mother tongue. “Just tell me what I need to know.”
Sebastian looked up with a frown. He had no idea what he could possible know that would interest big sunglasses. As if in response, the man did something strange. Extending his arm, he squeezed the handkerchief until a drop of clear liquid fell on Sebastian’s arm. It itched on contact, but that wasn’t the end of it. The man put the lighted tip of the cigarette in the exact spot. A blue flame flared, burning the hair. The pain was sharp and intense.
Sebastian did his utmost not to scream. He looked at his right arm. An irregular circle formed; the skin raw. He recognized it as a first-degree burn, but he hadn’t known it would cause such pain. However, the sharpness passed as swiftly as it had begun, leaving a sting in its wake. He looked up to the man. Sebastian figured the rag must be soaked in gas or rubbing alcohol. Damn, it hurt!
“That should give me your full attention.” Big Glasses repeated the process and, if possible, it hurt more.
“What the hell do you want?” Sebastian spoke through clenched teeth.
“You know, Gringo. I used to do this for a living, trained by the best – your own CIA. Can you believe that?”
Sebastian remained quiet. He wondered if his own countrymen would teach somebody how to torture human beings. He was not naïve. He knew it must be true, but never expected to come this close to such techniques.
“Man, I miss the Cold War. Back in the eighties, we had no limitations. Your President Reagan spared no expense.” The man laughed a sinister laugh. “We had a limitless budget. And the training sessions? Everybody looked forward to the end of the course. There was booze, broads, the works.
“Our primary target was to keep the commie bastards at bay! We excelled at that. We captured, we tortured, we created panic in their ranks, until they had nowhere to go but back to Russia. Then, when the elections in Nicaragua finalized the return to democracy, the flow of money stopped and we had an army with no cause. So we each found our own line of business.”
Another drop, another ignition. This time on his left arm. He sniffed something akin to pork skin burning. Sebastian’s heart pumped hard against his chest. He did not know where this conversation was going. The man kept rambling about the good ole days against the Red aggression.
“You want answers? Then ask the damn questions!” he blurted out.
“No, not yet.”
The man put out the cigarette on his arm. It hurt like hell, but he remained quiet. Then the man exited the room without asking anything. What the hell was he playing at?
CFC: You’re from Honduras and also write in Spanish. How difficult it is to switch from writing in Spanish to writing in English or vice versa?
JHB: It takes a while to get in to the proper frame of mind to sit and write. I usually put some music in the opposite language to which I’m writing. Why? Heck if I know, really!
However, one important thing is, I think and construct the sentences in the language that I’m writing, rather than translating from one to the other. Of course, I’m far from infallible. Enter proofreaders ­– can’t live without them!
The fun part—and I’m using the word “fun” very loosely here—is getting the right grammar and syntax. For example, Spanish places the adjectives after the noun, while English is the other way around. Thus, the “carro rojo” becomes the “red car.”
CFC: Tell us about your job coordinating the weekly Roundtable for The Big Thrill.
JHB: It’s been wonderful. I’ve been running the Thriller Roundtable since its relaunch back in April of 2012. Since I had participated in them back in 2011, I approached them to find a new spot for the promotion of a recent release; instead I got offered the opportunity to run it.
Every month I contact ITW members with upcoming releases to offer the spots. Coming up with the questions is fun, and I get to meet some of my all-time writer stars, like David Morrell and Raymond Benson. I recall bragging to my wife, “Hey, I’m exchanging emails with the authors of Rambo and James Bond!”


J. H. Bográn, born and raised in Honduras, is the son of a journalist. He ironically prefers to write fiction rather than fact. José’s genre of choice is thrillers, but he likes to throw a twist of romance into the mix. His works include novels and short stories in both English and Spanish. He’s a member of the Short Fiction Writers Guild and the International Thriller Writers where he also serves as the Thriller Roundtable Coordinator and contributing editor to their official e-zine The Big Thrill.
Find J.H. Bogran at his website, on Facebook, at Goodreads, or on Twitter: @JHBogran.
Find Firefall at: Rebel E Publishers, Amazon, Smashwords, and Barnes & Noble.
“FIREFALL is smart and engrossing. It's an intelligent, multilayered riff on international crime and punishment that has atmosphere to burn. It's a damned fine book.”
~ Jake Needham, author of THE UMBRELLA MAN and five other international crime novels
“From the power plays of an international band of car thieves to the behind-the-scenes of insurance fraud cases, all topped with a riveting and suspenseful climax, FIREFALL is an action-packed thriller. The small-dosed chapters, amidst exotic locations, won’t let you put the book down until you reach the end of this hell of a ride!”
~ Joe Moore, international bestselling co-author of THE BLADE and THE PHOENIX APOSTLES.
Posted by Jodie Renner at 5:00 AM