How Much Would you Pay to go to a Bookstore?

I'm going to rant a little here today. I just returned from the South West Book Fiesta in Albuquerque, New Mexico. This is the sixteenth book festival I have participated in since I became a published author. Book festivals are a fabulous place for readers to meet authors and for authors to meet new readers and often touch bases with fans. There are generally some very interesting speakers and lots of things to learn and maybe even some networking going on at these festivals across the nation. I have attended in Los Angeles, Chicago, South Carolina, Tucson, Decatur, and many others. The South West Fiesta in Albuquerque this past weekend was the first one where I was disappointed with the promotion.

This festival had a very poor turnout. I don't know how much advertising the promoters did for this event so I don't know if the public even got the word. But, more importantly, it cost $10 per person to get into the festival. That means a couple would have to pay $20 before they could even see what was inside. In these economic times, I find that outrageous. Very few people in Albuquerque showed up to this event and I can't say that I blame them.

Needless to say, the exhibitors were not happy. Many of them traveled long distances, spent money on hotels, on their booth, and took time out of their busy schedules to make this trip. That's not where my complaint lies, because that's the price of doing business and I can deal with that. What really upset me was that the people of Albuquerque could have had an enriching and fun experience if this had been handled differently. Los Angeles has been doing it for years and providing an incredible experience with the Los Angeles Times Festival of Books. No one expected that kind of an event because they have had years of practice, but Tucson figured it out when they started five years ago. They spent a lot of money on advertising, opened the event to the public, and worked hard at getting good speakers that helped to draw the public. Each year they improve on the last, and it has grown into quite a spectacular event. I think the same thing could have happened at the South West Book Fiesta with a little better planning and foresight. They certainly had plenty of good examples to follow. I expect this was the first and last South West Book Fiesta and that's a real shame.

I have never before been to a book festival that charged an entrance fee. It kind of feels like going to a book store or a library and having to pay to get in. I just think a lot of people missed out on a what could have been a wonderful event if it was free. Have you ever had to pay to go to a book festival? Would you? 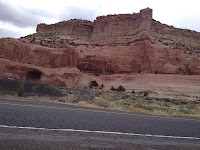 All that said, I still had a wonderful trip. I saw some old friends, made some new ones, saw a lot of beautiful scenery, and had some delicious food. I'll never make another trip to Albuquerque without stopping at The Range Cafe for one of their chili relleno burgers...the best burger I've ever had!

Posted by Teresa Burrell, Author, Attorney, Advocate at 6:00 AM