What the Heart Remembers by Debra Ginsberg.

Cellular memory is the theory that the body's cells retain memories independently of the brain.  A more detailed explanation can be found here.

The protagonist of Debra Ginsberg's latest novel, What the Heart Remembers, is Eden Harrison,
an elementary school teacher and a marathon runner, engaged to the love of her life.  One day while out for a run, Eden collapses, and discovers that she suffers from a condition called symptomatic arrhythmia, which is severe enough that she requires a new heart.

After her  heart transplant, she inquires about the identity of the donor, but is informed that the family wish the information to remain confidential.  At first, Eden seems obsessed with the idea, but when even her fiancé Derek (who generally thinks she's perfect) thinks she should let it go, she appears to agree.

Gradually, she realizes that she doesn't feel the same about things as she used to.  She loved pink so much that Derek (who owns an athletic shoe company) designed a pair of pink running shoes for her. When it gets to the point that she doesn't feel a physical attraction to him anymore, Eden known something has to change.

She changes everything by leaving her home in Portland, Oregon, and moving to San Diego.  Once there, she heads directly to a restaurant called Poquette and gets a job waiting tables.  Every move she makes seems determined by something inside her; she doesn't know what.  And San Diego, Poquette, and many of the people she meets there seem somehow familiar.

As she settles into the city and her job, she meets some of Poquette's regular patrons.  She has flashbacks that seem like memories of one woman in particular, a wealthy widow named Darcy Silver.    Then she learns that Darcy's husband died recently enough for it to be possible that he was the original owner of her heart.

Did her heart come from Peter Silver?  Is this why she feels she knows Darcy so well?  Eden is pretty sure that this is the case, and sets out to make sure. 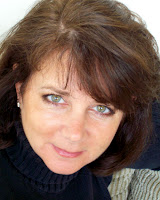 Debra Ginsberg is extremely skilled at getting inside a character.  She feeds us bits of the story at a time, first through one character, then another.  She communicates equally well from the viewpoint of  Eden, Derek and Darcy, and in doing so manages to increase the suspense of the tale until almost the very end.

What the Heart Remembers is definitely a read-in-one-sitting book, so don't start it at bedtime!


I was fortunate enough to do a short Q & A with Debra Ginsberg.  It's published today on Stuff and Nonsense.


FTC Full Disclosure: Many thanks to the publisher, who sent me a copy of the book for review purposes.
Posted by Unknown at 12:30 AM