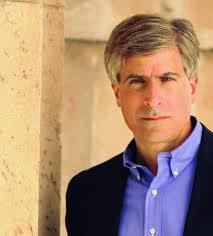 Steve Berry, in his workshop at Craftfest, the first two days of Thrillerfest, spoke about “psychic distance”—how close the reader feels to the various characters. These days, it’s considered more effective to draw your readers in “up close and personal” to your protagonist, so they get more emotionally invested in him and his plight, and want to keep turning the pages to find out what happens to him. Conversely, it’s best to keep minor characters and walk-ons at an emotional distance proportionate to their importance to the story.

The following list shows examples of ways to refer to your characters in your book, starting way out in the distance, in omniscient point of view (or from the POV of a character referring to another “walk-on”), then gradually moving closer as the characters become more important to the story, until we’re right in their heads, in close third POV (or first-person POV), seeing and feeling what they are, reacting right along with them. This list is based on Steve’s hierarchy, but expanded by me, with more details added.

Starting from furthest out and going down to right in their heads, refer to your characters as:

· By their title, job, profession, etc. without their name, eg. the detective, the police officer, the reporter, the cab driver, the waitress, the hotel clerk, etc.

Steve Berry will start out a book with the full name of his POV character, for example, Cotton Malone, to get us right into his head fast. He doesn’t start with “the former Justice Department operative” as that’s too distancing for the protagonist, whom we’re supposed to identify with and bond with quickly. Then Berry immediately switches to just Malone, and works in later that he retired from the Justice Department. Berry doesn’t use the full name again, as that would put us back at arm’s length from the character. Using their title as well as the name (Detective Wade Jackson) would back up the reader even more, and once we’re in their head and the story is progressing, using the title alone (“the detective”) would probably make the reader wonder who we’re talking about.

But Berry takes it one step further and prefers to just use “he” most of the time when in Malone’s point of view, to keep the psychic distance to a minimum. In this case, “he” is the equivalent of “I” in first-person point of view. For example, Berry uses Malone’s name, then continues for three pages with just “he”, until the beginning of the next chapter, where he starts with his name again. In another novel, Berry starts out with “Tom Sagan” (his protagonist), then switches to “Tom,” then just uses “he” most of the time. As Steve says, “the tighter the psychic distance, the better it is.”

You may not wish to take it this far, but do remember that if we’re in a character’s head, especially your protagonist, you don’t want to use distancing descriptions of him or her like “the PI” or “the doctor.” It makes sense to start the novel with the full name and title, like “Special Agent Warren Cross” for clarity and to orient the reader quickly, but soon after, you’ll likely switch to “Cross” (or maybe their first name) and stay there. If we’ve been in his head for a while and you suddenly refer to him as “the special agent” it will be very jarring to the reader, who may even wonder if another special agent has arrived on the scene.

Berry prefers to call female POV characters by their first name, and I tend to agree with him, for the most part. If the female is, say a police officer, in a milieu where everyone refers to each other by their last names, then use her last name when she’s at work, and her first name when she’s at home or among friends. In general, though, it seems more natural to call “close” female characters (and even most males) by their first name, especially when we’re in their viewpoint. Along the same lines, Berry will usually refer to the villain by his last name, even in his POV, to create some psychic distance.

Using a related example, disguised from my own editing, say your young mid-20s male protagonist has hooked up with a female in her early 20s and they’re on the run from the bad guys. Very soon, he’s not thinking of her as “the young lady” (if he ever was—he probably thought of her as “the girl” at the beginning) or “the grad student,” or “the tall, thin girl” or whatever. As their bond increases, he’s thinking of her only by her first name or “she.” And to describe something they’re doing, don’t say “the two young companions” as again, that’s too distancing. It reads like someone else talking about them, but we’re in his head and he’s become very close to her. He’s not thinking of the two of them as “the two young companions.” Just use “they” or “the two” or whatever.

On the other side of the coin, you definitely don’t want to get into the point of view of any minor characters like store clerks, taxi drivers, restaurant servers, etc., and best not to give them a name at all, unless they play a bigger role in the overall plot. Naming these walk-on characters can be distracting to the reader, who starts to think they have more importance somehow. So in general, just stick with “the cab driver,” etc.

What do you think? As a reader, have you ever felt jarred by language that perhaps inadvertently changes the psychic distance between the reader and a character? As a writer, do you have any opinions about this issue?

Jodie Renner, a freelance fiction editor specializing in thrillers and other fast-paced fiction, has published two books to date in her series, An Editor’s Guide to Writing Compelling Fiction: WRITING A KILLER THRILLER and STYLE THAT SIZZLES & PACING FOR POWER (Silver Medal winner in the FAPA Book Awards, 2013). Both titles are available in e-book and paperback. For more info, please visit Jodie’s author website or editor website, or find her on Facebook or Twitter.