A hit man just wouldn't be hit man without a silenced firearm. But, silencers (technically referred to as suppressors) affect only one aspect of sound. You see, in order to properly use a silencer in your writing you need to understand how sound works following the discharge of a gun. Sound is important evidence. Whether writing about a barking dog or a gunshot it's important for writers to understand how sounds will be heard by various characters. Sound is basically produced by disruptions in the air causing pressure waves. Modern firearms create two distinct sounds when fired. 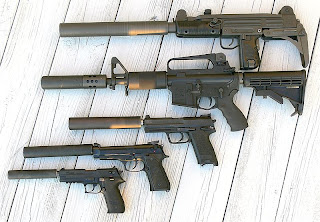 Suppressors are screwed or seated onto the muzzle of the barrel. You're probably very aware of their appearance. They look like a thicker tube (usually twice as thick as the barrel at least) sticking out the front of the gun. Suppressors have a variety of proprietary designs but they all function in basically the same way. Baffles inside the cylinder "dampen" the gas pressure and sometimes even slow the velocity of the bullet. By dispersing and dampening the gasses the suppressor reduces the disruption of air; which reduces sound. The more the baffles dampen the air the less sound produced.But the use of a silencer (suppressor) may not eliminate the sound of a gunshot.

That fact is due to the second main source of sound in a gunshot; the sonic boom of the bullet traveling through air. This is an independent act that occurs after the bullet has left the suppressor. It is well known by shooters that the bullet strikes the target before the sound wave does.  Most modern cartridges are capable of reaching super-sonic speeds. Putting a suppressor on the end of a gun doesn't usually change this fact. I've worked for law enforcement agencies that used suppressed weapons in a variety of tactical assaults. One "benign" use would be to shoot out the tires on a suspect vehicle parked outside his residence while the SWAT team is preparing to make entry.

In order to do that the shooter must use "sub-sonic" ammunition. This ammunition is designed to have a muzzle velocity below the speed of sound. Still powerful enough to shoot out a tire but not enough to make a sonic boom. Most authors don't get into this level of detail but it wouldn't hurt to mention that your character is firing sub-sonic ammunition with their suppressed weapon. You'll demonstrate your knowledge about how sound works and might keep a couple of critics at bay. Sub-sonic ammunition is easy to find and some bench shooters use it for plinking so as not to disturb their neighbors or damage their ears. Now there will always be some level of sound from the mechanical function of the slide or dropping of the hammer but for all practical purposes the weapon will be "silent".
Posted by Tom Adair at 9:00 AM