For the last two months, I've attended weekly sessions of the Eugene Police Academy. It was a huge time commitment and some of it was tedious, but overall, highly recommended for crime fiction authors. I got some great ideas for the story I was writing, and I connected with some detectives I hadn't met yet. One provided great details for the fraud investigation in my story, and the other loaned me an old case file (a foot thick), including tapes of the interrogation in which the suspect confessed to murder. A treasure trove I'll dig into this weekend.

There's much I could share about this class, but I'll stick to some visuals from the crime lab where the lead criminologist gave us a two-hour crash course in processing evidence. Many of the chemical references didn’t stick with me, but what I learned is that real-life evidence technicians (versus the CSI kind) spend most of their time processing latent fingerprints and watching/editing surveillance videos. Both are tedious pursuits that require attention to detail and patience, but what they produce is the critical evidence that leads to criminal convictions.

Here are the photo highlights of my visit. 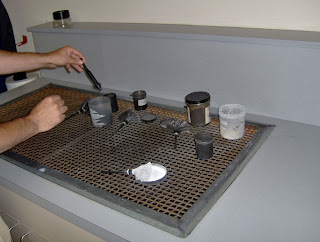 This is a downdraft table where technicians use various colors of powder to process fingerprints. The downdraft sucks up the excess powder, which would otherwise go everywhere. 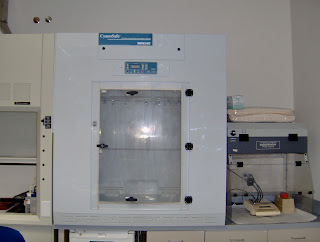 Technicians don't really use superglue, only one of its chemical components: cyanoacetate, which mixes with steam to form a coating all over an object. The coating reveals latent fingerprints when it hardens. 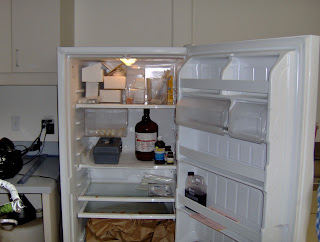 The lab refrigerator holds many things, including entomology evidence. Evidence technicians grow and kill flies at various stages to establish time of death for bodies that aren’t found in a timely manner. 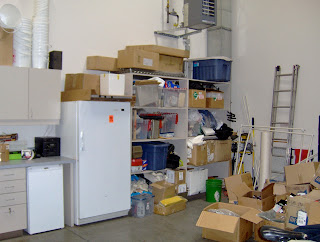 The large bay where technicians process cars, ATM machines, and other big items looks a lot like a homeowner's garage, including a little blue kiddie swimming pool. 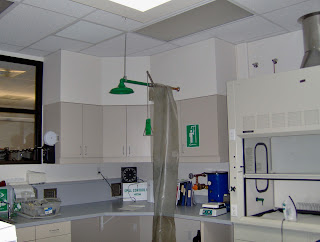 No lab is complete without a shower. Many of the chemicals technicians use are dangerous, and they must have access to an immediate way to rinse of their clothes or bodies.

The last class I'll attend is this weekend, and we'll be doing simulations scenarios, involving people with guns and others with babies in their arms. I'll be making split-second decisions, and I'm nervous. I hear it makes your adrenaline pump almost like the real thing.

Have you taken a Citizen's Police Academy? What was your favorite part?
Posted by L.J. Sellers at 5:00 AM