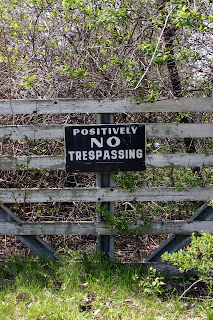 I have always been one of those people who will tell anyone just about anything about me because I truly love to connect. I think the more we know and share about each other, the more we'll find common ground and will be able to build a lifelong relationship. The ideas of keeping secrets and holding your cards close to your vest have been very difficult for me to incorporate into my daily routine. In fact, I generally don't. Just ask my husband.

This is a scary world. I was shocked to hear that in the two years since Gabby Giffords and the others were shot in Arizona, there were eleven mass shootings in the United States! All of our radar is up and functioning more than it would ever have been earlier in a different age. At least it should be.

It's important to recognize that there are a lot less publicly violent ways to assault a life. There's identity theft, slander, malicious one-star reviews, and stalking, to name a few. There's nothing much we can do about people who slam our books. They're out in the public domain, after all, and our skin should be thick enough by now to absorb the punches. But we need to try and be smart about the rest of it.

I want to interact with my readers. From them I receive affirmation and support and encouragement and all of those amazing things I thought were just there for the "big guys" like Stephen King or Dean Koontz. Readers who enjoy my efforts are the ones that make me say it's okay not everyone likes my stuff. That they like it is sufficient. But I have found a few places where the boundary lines have been drawn. And they're not drawn just for me. They're drawn for my family.

It's important to note that even having drawn these lines, it's impossible to maintain absolute privacy any more. My goal is to have enough elements in place that I'm not an easy target if someone is targeting people, while at the same time being able to talk to readers in a meaningful and personal way.


Authors, what about you? Have you considered you might be vulnerable? What kinds of things have you done to give yourself a sense of privacy?

Readers, does it bother you to see a kind of roadblock between you and your favorite authors?
Posted by Peg Brantley at 12:00 AM